According to police, four people have been detained for allegedly sexually abusing a 25-year-old lady during a birthday celebration on November 9 in a village in the North 24 Parganas region after she filed a complaint.

Police reported that a medical examination of the woman, who had been admitted to a hospital in a critical condition, had revealed rape.

The woman said in her police station report that four men sexually assaulted her while she and a friend were at a resort that was hosting a party, where they stayed until 10 p.m. The woman also claimed that she had been drugged before to the incident.

“Following the complaint, senior police officials carried out raids through the night and arrested the four men. A detailed investigation into the incident is on,”

The post 4 are being held for “sexually abusing” a woman appeared first on OUR INDIA. 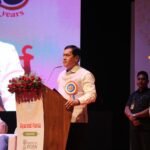