Lowang is also the founder of the ‘Nocte Digest’, a digital library that promotes the traditional and cultural heritage of the Nocte community.

Gao lauded Lowang “for his creative works, which will help the young generation of the Noctes to know more about past and present of the Nocte traditional and cultural heritage.”

The book is based on the role of the Nocte tribe in making Assam the cradle of Indian tea industry. It highlights the relation that existed between the Nocte Chiefs of Namsang and Borduria villages with the Britishers which ultimately led to the creation of first Indian tea garden in 1834.

As time went by, dispute began to arise with the Britishers. Ultimately when the Noctes of Borduria village stopped receiving their annual tax from the Britishers, their Chief Wang Maan instigated the Wanchos to attack and kill 80 men of Lt. Holcombe’s expedition team in 1875.

The Britishers were unable to launch a direct military action against the Noctes due to lack of evidence. In this way, the Noctes were able to teach the Britishers a lesson without inviting the wrath of the British empire. 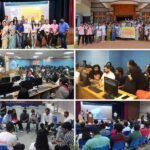