Punjab and West Bengal, according to Chief Minister Mamata Banerjee, were at the vanguard of India’s independence campaign, and Punjabis significantly aided the cause of their nation.

The founder of Sikhism, Guru Nanak, Guru Tegh Bahadur, and Shaheed Bhagat Singh are all from Punjab, Banerjee said at a festival honouring Guru Nanak’s birth on the occasion of his 553rd birthday at Kolkata’s Shahid Minar.
As can be observed if you visit Andaman’s Cellular Jail and look at the list of those who revolted against British administration, people from Punjab and Bengal took the lead in the fight against foreign power.
Bengal and Punjab have a history of cooperation as a result.

“This is why the name of Punjab was mentioned first when Gurudev Rabindranath Tagore wrote Jana Gana Mana (National Anthem). That was because the people of
Punjab are ready to sacrifice their lives for the country. The people of Punjab are still working in the army, protecting the nation on the border,” the Chief Minister said.

Punjab is primarily populated by Sikhs. She went on to say that Shaheed Bhagat Singh and Bengal also developed strong bonds throughout the struggle for independence. 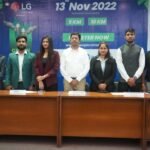