Peak of Kedarkantha is situated at 12,500 feet above sea level

During Diwali, the Kedarnath temple doors are closed and the road to Kedarkantha is open for trekkers. Six youths from Vadodara following the same route reached the top of Kedarkantha, which is 12,500 feet above sea level, in just three days.

Dhaiwat Pandya, founder of Thrill Blazers, said that the history of Kedarkantha is connected with mythology. Lord Hanuman did penance at Kedarkantha to seek forgiveness from Lord Shiva after Pandavas was involved in Brahmahatya in the Mahabharata war. 6 youths including Kapil Virpara, Maharshi Purohit, Kalpesh Pandya, Smith Darjee, Ravi Patel and Vinay Pandit completed the trek in three days at Kedarkantha at Govind Wildlife Sanctuary.

On the first day, they went to Juda Ka Talab from Sankari where they stop for night stay and then reached base camp the next day. Where after making camp fire at night, at 2.30 midnight, they started climbing to the top of Kedarkantha. The youths completed the trekking as soon as the sunrise. The best time to climb the top of Kedarkantha is sunrise and 2 to 3 hours after it as after wind is so fast that it would not even allow a human being to stand.

It is to be mentioned here that the youth of Thrill Blazers held the first summit this year at Vyas Kund and Bhrigu Lake. Also Thrill Blazers has received Gujarat Tourism Award for the last 4 years. 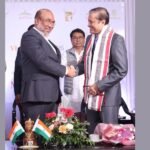