Netherlands produced an outstanding performance with both the bat and the ball to defeat South Africa in Adelaide and secure their position in the top four of the Super 12, which ensures their qualifying for the T20 World Cup 2024.

In the process, South Africa was eliminated from the competition, and India advanced to the T20 World Cup semifinals ahead of their match against Zimbabwe later today. The match between Pakistan and Bangladesh later today will suddenly be a game of life or death, with the victors going on to play India in the semifinals.

South Africa chose to bowl first, and their new ball bowlers were all over the place as Stephan Myburgh lit up the scoreboard. Anrich Nortje slowed down the scoring rate, allowing spinners to re-enter the game for South Africa.

Nevertheless, Colin Ackermann pitched a fantastic inning to help Netherlands to a high total. The challenge was always going to be difficult for the Proteas with 158 on board. Their hopes were hurt by Quinton de Kock’s early dismissal and Temba Bavuma’s in the Powerplay.

Before Rilee Rossouw and Aiden Markram both made way, Netherlands kept things close with spin. It was all up to David Miller and Heinrich Klaasen, but when Miller was caught by Roelof van der Merwe with an incredible catch, South Africa’s hopes were dashed.

India’s entry into the semifinals was assured by South Africa’s abrupt withdrawal. With a victory, they would take first place in the points standings and face England in the semifinal. 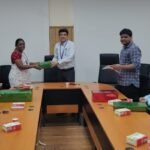