Akhil Giri, a minister for West Bengal, has faced harsh criticism for his divisive comments on President Droupadi Murmu.

The Trinamool Congress (TMC) minister issued an apology on Friday following the viral success of a video of his remarks. The TMC distanced itself from his remarks, while the BJP demanded his arrest, expulsion from office, and a public apology from Chief Minister Mamata Banerjee.

In the video, Suvendu Adhikari, the Minister for Correctional Administration, is heard saying, “He (Suvendu Adhikari) claimed that I am not good-looking. How stunning is he? We don’t evaluate people based on how they look. We regard the President’s office (of India). How does our President look, though?

“He (Giri) has injured the sentiments of over 10 crore tribals and undermined the country’s democratic values,” said Union Tribal Affairs Minister Arjun Munda.

Offering an apology, Giri said: “I have taken oath as a minister. I respect both the Constitution and the President. I was referring to comments by BJP leader Suvendu Adhikari, who kept attacking me over my looks. However, I apologise for my statements and would like to reiterate that I have immense respect for President Droupadi Murmu.” The minister continued: “I mentioned the post and made a comparison to respond to Adhikari. I didn’t take any name. He had said I look bad. I am a minister and I took oath of office. If something is said against me, it is an insult to the Constitution.”

“We have the utmost respect for Hon’ble President of India, Smt Droupadi Murmu. Our party strongly condemns the unfortunate remarks made by MLA @AkhilGiriAITC and clarifies that we do not condone such statements. In the era of women’s empowerment, such misogyny is unacceptable,” .

In the meantime, BJP members filed a complaint against Giri at the Nandigram police station, and state BJP MLAs requested an urgent meeting with the governor to seek Giri’s dismissal on the grounds that he no longer has the moral standing to serve as a minister.

Additionally, Giri’s comments sparked protests in Odisha, where BJP supporters reported him for making disparaging statements against the “daughter of Odisha.” Sambit Patra, national spokesperson for the BJP, led a protest in Nayagarh town, which is part of the Puri parliamentary constituency, and described Giri’s remarks as an insult to the swabhiman (self-esteem) of Odisha. He added that they were not only directed at the President but also to women and tribal people. 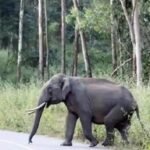