GUWAHATI,  NOV 21: A carcass of of leopard was recovered at Maijan tea estate in eastern Assam Dibrugarh on Monday morning.

The workers of the tea garden found the carcass of the leopard on Monday morning while they are plucking tea leaves.

“The forest department came and take away the carcass of the leopard for postmortem. The leopard was died 2-3 days ago,” said a local resident.

Leopard frequently ventured in the tea garden area in search of food.

“The leopard takes away our domestic animals. Our children are afraid to go out due to the fear of leopard. Recently, many leopards were caged form our tea estate,” he said.

However, incidents of man-animal conflict have been reported from different parts of Assam.

Experts say that due to shrinking of forest covers, the big cats come out from the forest in search of food and land in human territory which results in man-animal conflict.

“Right now we could not  say how the leopard died. But postmortem report will reveal the truth,” said a forest official.

The post <strong>Assam: Carcass of leopard found at Maijan tea estate in Dibrugarh</strong> appeared first on OUR INDIA. 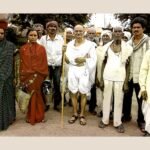