0
During their demonstrations demanding teaching employment outside the Trinamool Congress national general secretary Abhishek Banerjee’s office on Camac Street and at the adjoining Exide Crossing on Wednesday, more than 280 TET 2014 qualified candidates were detained by police.
Police violently removed the demonstrators, causing some of them to sustain injuries, because the demonstrations were held “without requesting prior permission.”
A female demonstrator claimed that while being led to a police van, a policewoman “bit her hand.”Traffic flow was interrupted at Exide Crossing, Camac Street, and AJC Bose Road as a result of the altercations between police and the protesters.
“We are 2014 TET-qualified candidates. We came here demanding our legitimate teaching jobs. Our jobs were given to those who paid huge amounts of money. Today, we were mercilessly beaten up by police. A woman constable bit me on my hand,” said a woman protester. A man, however, claimed that he was beaten up by police after he refused to leave the area. “This is the prevailing condition here. We do not have the right to protest on the streets. Police are beating us up,” he said.

There was a bustle and mayhem in the area as police officers were observed removing protesters who were lying under police vans in an attempt to avoid arrest. More than 280 demonstrators, according to the police, were detained after their unannounced agitation, and the situation was under control in less than 30 minutes.

Additionally, the event sparked a verbal exchange between BJP and TMC leaders. “This administration has played with the lives of thousands of deserving candidates by selling their jobs,” BJP leader Samik Bhattacharya said. The Mamata Banerjee administration is the most deplorable and

Countrywide intolerance exists. It has always worked to put an end to legitimate candidates’ protests. It occurred again today.

“Police did not use batons on the protesters. They were heading towards Abhishek Banerjee’s office, and thus, police stopped them. If they want to get jobs, they will have to sit for interviews. Jobs will be provided to them as per the recruitment process and not for protesting on the streets.” 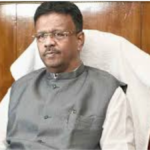