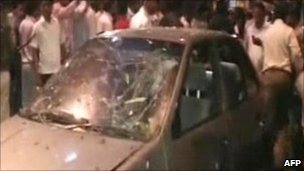 Mumbai:  Three explosions have taken place in Mumbai on Wednesday evening – two in South Mumbai at Opera House and in Zaveri Bazar and one at Dadar West, in central Mumbai. The Home Ministry has confirmed a terrorist attack and Mumbai is on high alert.All blasts took place during rush hour and in crowded places. Eyewitnesses said about 15 to 20 people have taken to hospital in Zaveri Bazar. Reports said six people had died in the Dadar blast, four in the Zaveri Bazaar blast.One explosion,  in a car at a bus stop in Dadar West, has been confirmed. A police officer said there might have been an explosive in a meter box behind a hoarding at Khau gali, a street filled with eateries at Zaveri Bazaar. The Opera House blast took place at Prasad Chamber.

An unexploded bomb has also reportedly been found in Dadar and a bomb disposal squad is working to defuse it.Early reports said a police control room had received a call claiming that there were serial blasts in Mumbai. A National Investigation Agency (NIA) team has rushed to Mumbai from Delhi to investigate and collect forensic evidence. The police have appealed for calm.Zaveri Bazaar has been hit before –  over 50 people were killed in twin blasts in 2002.  Malls, markets and other crowded places in Delhi, Chennai and Bangalore are on high alert.
source: NDTV
photo courtsey: AFP