GUWAHATI, NOV 21: In a shocking incident, a man was shot dead in broad daylight and Rs 2.5 lakh reportedly looted from his possession in the Panjabari area of Guwahati.

According to sources, Ranjit Bora, a distributor for the ‘Purabi Dairy’ located in the same area, was shot point blank in the head by an unidentified assailant around 11 am.

Eywitnesses  said the murderer, along with an accomplice, sped away on a Hero Honda Glamour two-wheeler.

According to police, Bora sustained bullet injury in his head and was rus Bora was subsequently rushed to the  Gauhati Medical College and Hospital (GMCH)  in Guwahati’s Bhangagarh area, where he wasd eclareed  dead by doctors.

According to reports, the incident took place while he went to bank to deposit money.

The incident took place near the Silpagram at Panjabari road in Guwahati, Assam.

Police have started investigation into the matter. 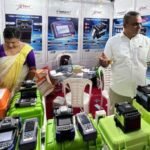