0
On Thursday, a fire started on the second story of a hospital building in Kolkata.
To put out the fire at the SSKM hospital, nine fire trucks were dispatched.
No patients were trapped, and as the fire is now under control, there have been no reports of injuries thus far.
Around 10 o’clock in the evening, a fire broke out on the government hospital’s second level.
Within minutes, it migrated from the CT scan room to the X-ray room.
Police believe that an electrical short circuit caused the fire to start.
On the scene are DCP (South) of Kolkata Police Akash Magharia and state ministers Firhad Hakim and Arup Biswas.
The fire is under control, according to the fire department, and fire tenders are searching for any concealed pocket fires.

The post At the SSKM hospital in Kolkata, a large fire starts. appeared first on OUR INDIA. 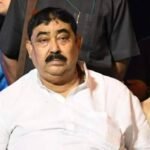