Chandigarh (India), November 8: After the raging success of ‘Honeymoon’, Punjabi Actor Gippy Grewal took to his Instagram handle to announce his new film Maujaan Hi Maujaan. The film seems to be entertaining filled with lots of comedy and drama. With the amazing star cast, one thing that is in is the Abundance of laughter.

The film is written by Naresh Kathooria and directed by Smeep Kang. It is produced by Amardeep Grewal under East Sunshine Productions. The shooting for the movie will begin soon and is expected to release around summer 2023. The film stars Gippy Grewal, Binnu Dhillon, Karamjit Anmol, Tanu Grewal, Hashneen Chauhan and many other talented actors.

Sharing Views, Actor Gippy Grewal said, we will start shooting for the film soon and the entire cast and crew is very supportive. It has very different storyline with a different character. I hope viewers will support our new creation whole heartedly and bless us.”

Sharing views, Producer, Amardeep Grewal, said, We are very elated to announce the launch of our new film. It is filled with madness, humor, and comedy and amazing star cast. We want our audiences across the globe to shower their love and support us as always for this film. 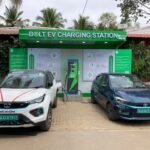