As a Gujarati, when I see you on the throne of Delhi as the Prime Minister, the chest of six crore Gujaratis, including me, swells. When you travel abroad and meet other world leaders with a lion-like gait, you get the impression of the Vishwaguru. After 27 years in Gujarat and eight years in the central government of Delhi, Chomer has seen only development since he held the reins of power. But when elections come in Gujarat or other states of India, you yourself are a leaderEver since Keshubhai Patel’s government handed over the reins of power after the devastating Kutch earthquake, your love for Kutch is well known. When you go to any corner of the world, you don’t stay without remembering Kutch and its people.

The whole world has seen the development of your double engine government with precision in government administration. But when the election comes, instead of the development works, the name of Latif, the name of which the Congress was doing the politics of minority appeasement, is not liked. In fact we sold in Gujarat.Sir, the way you suppressed terrorism is Kabulidad. But do you think it is appropriate to mention things like communal riots, Latif, terrorism etc. every time the elections are over? I don’t think so. Because sir, for so many years we have given the message of good governance not only in India but in the whole world through the Gujarat model. If there is a house, there will be differences. And you have the whole country listening. So sometimes there is resentment. However, you are continuously advancing Gujarat and the country due to your outstanding tact.

A recent example of which happened in GandhinagarWhen the Morbi bridge collapsed and as many as 130 people lost their lives in it, the way you were saddened at the meeting in Kevadia and you were in tears. That shows how sensitive you are. And yes, don’t forget to pay tribute to those who died in the tragedy. Otherwise Congress will get another chance.

There are many things to talk about, but when it is election time and all the burden is on you, finally, I insist on one thing that you should talk only about the development of Gujarat that we have made in the speech.

The post Modi sir, we have developed in Gujarat in 27 years, then why do we have to remember Latif who dragged the election. appeared first on OUR INDIA. 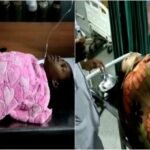