In a cooperative election held on Monday in the Purba Medinipur district’s Nandakumar, THE TMC came in last. This time, a coalition panel made up of the regional CPI(M) and the BJP defeated the TMC.

On Sunday, candidates ran for office in the Nandakumar-Baharampur Cooperative Agriculture Credit Society. There were 63 seats in all. All of the seats were won by the West Bengal Samobai Bachao Committee.

“We have already won 52 seats unopposed. There was voting in 11 constituencies.” Ashok Kumar Das, former secretary of the cooperative, added, “This organisation [Samobai Bachao Committee] has created a platform. The platform has been created to fight against the TMC.”

“Such instances should happen more often. So that we [TMC] can prove that the CPM and the BJP are hand-in-glove.”
Congress leader Adhir Ranjan Chowdhury said, “At the grassroots level, many things can happen. But the CPM leadership should take note of this.”

“No political parties fight in the co-operative society. Individual candidates used to fight. Here, these candidates fought against corruption and against some close to the TMC who controlled the cooperative society.”said BJP  state President Sukanta Majumder. 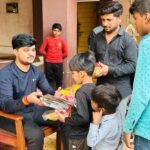