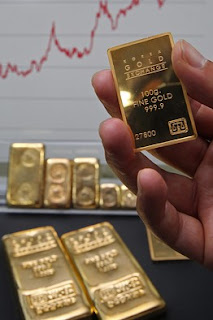 WSJ :Gold is galloping higher at a rate last seen in October 2008, gaining over $70 a troy ounce from Friday’s low, while copper, oil and aluminum are trying to find a footing after the biggest pan-asset class sell-off since the collapse of Lehman Brothers pummeled them lower.
The trigger for the latest weakness is Friday’s downgrade of the U.S. credit rating from AAA to AA+ by ratings agency S&P. Although widely expected, it was the symbolic icing on the cake at the end of a tumultuous week for the financial markets.
But the difference between now and 2008, however, is that back then, irresponsible lending activities by individual banks like Lehman Brothers and Bear Sterns were deemed to be the cause of the problems.
Now the economic fortunes of whole countries are at risk, with policymakers deemed to be ineffective in their management of the situations and incapable of coming to consensual agreement over how to stem the rot. Statements of shoulder-to-shoulder solidarity by euro zone leaders are, while calming, failing to be viewed as anything more than a sticky plaster over a deep wound, and most expect the U.S. to enter another round of bickering as it negotiates the next round of its debt repayments later in the year.
So what does this mean for commodities?
If the world’s economies are teetering on the brink in conditions a lot more potentially damaging now than they were in 2008, then the likelihood is that gold will stay stronger for longer and assets linked to growth like copper, oil and aluminum will fall harder and stumble along until real signs of underlying consumption are seen.
It’s a good time to be long in gold. The precious metal is seeing a raft of upgrades to forecasts, most recently by Goldman Sachs and last week by Morgan Stanley, ANZ, UBS, MF Global and Barclays Capital, as well as bullish statements on the market’s outlook by Barrick Gold,AngloGold Ashanti and Randgold Resources.
The metal, traditionally a beneficiary at times of risk, has soared to yet another record high of $1,715.29 a troy ounce Monday, and is poised to rally further. While the U.S. dollar may benefit from fears of another global slowdown, U.S. fiscal concerns will probably outweigh in favor of gold.
Even if investors from time to time may sell gold to make margin call payments, as was seen last week, the movement of cash out of the precious metal isn’t likely to be a persistent theme unless other asset classes start looking a whole lot better to invest in.
And that isn’t on the cards for any time soon. The S&P downgrade comes at a time when the financial markets and developed economies are already very fragile. Analysts say the very worst case scenario is that the U.S. and other Western economies slip back into recession; indeed, Goldman Sachs said its economists now place a one in three chance of a U.S. recession that would most likely occur within the next six months.
Add into the mix the likelihood of the current low interest rate environment continuing well into 2012, and the slow but steady likelihood that a third round of quantitative easing is on the cards, and gold looks to be a safe bet for some time to come.
But just how much higher can gold go?
Paul Dales, senior U.S. economist at Capital Economics, says any adverse market reaction will be temporary, and that it won’t be long before the dust from last week’s storm settles and the markets focus once again on their underlying economic fundamentals. Higher costs make a return to commodity price levels seen a decade ago virtually impossible, as the slide lower would likely drag the world’s mining and oil companies into bankruptcy in the process.
Growth will eventually return, and this will require copper to build houses and roads, and oil for manufacturing and transportation. But most market observers agree that U.S. and euro zone growth isn’t on the cards for the immediate future, and that this will have consequences not only for these vast economies but also for the export-oriented economies in the emerging world, like China.
Market sentiment has taken a serious knock. Copper and oil are correcting to levels that many participants say are more realistic given still lackluster underlying demand. The froth is being removed from the sector, according to analysts, so the best thing investors can do is to buckle up and hang on for the ride.